I’m still an anime fan. I love all kinds of anime, not just Mecha like Gundam. I enjoy sports anime (ones that are sports like soccer or tennis … not board games like Go or Shoji those are slow going for me. So below I will list what I’m watching this summer. All of it is on Crunchyroll. Crunchyroll will let you watch for free if you don’t mind commercials or you can pay (with I do) so you don’t have to sit through ads. If you want to try any of these titles out leave a comment and I could give you a code for 14 days of free trial of CR without the ads, until I run out of codes. 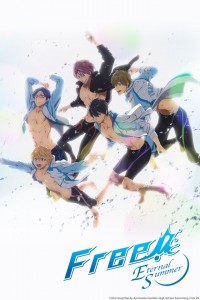 This is the second season of this anime of childhood friends who were part of a swim team. As they reached high school, their school didn’t have a swim team so they worked at creating one.

There is conflicts, there’s drama, there’s lots of crotch shots of teenage boys which should make you feel shame, but it’s done so damn cute that you don’t feel like a complete pervert watching it. It’s a short series, it will probably be 12 episodes like the first season, but it’s one of those feel good shows that makes you want to hop in a pool and go swimming.

Speaking of sports, I didn’t think I would like this one because I have no interest in Volleyball but damn if I didn’t get sucked into Haikyu!! 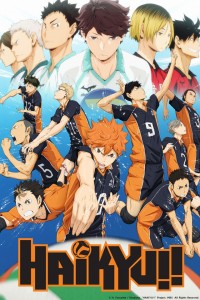 Actually I believe this one started in the spring but I was bored waiting for summer fare and started watching a few days ago. You have Shoyo Hinata, a boy who was obsessed with volleyball. He saw a tournament on tv where someone as short as himself was called Little Giant and was a team hero. It inspired Shoyo to pursue volleyball the problem? His middle school didn’t have a male volleyball team in middle school. He somehow managed to create a ragtag team to go to a tournament and they have to play one of the top teams in the tournament. Shoyo was pissed off at the superior attitude of the opposing teams setter, Tobio Kageyama, whose nickname was King of the Court. Shoyo’s team gets beat handily but it doesn’t discourage him, he joins the high school where Little Giant played.  He also discovers that King of the Court also goes to the same school. The “king” got abandoned by his teammates during the tournament in middle school because of his bad attitude. Also the top volleyball schools rejected him because of his bad attitude.

They learn to get along and learn along the way that a short player who can jump high and loves to spike, and the perfectionist have the same goals. It’s like most sports animes only without the “physics-free zone” of player moves.

Virtual Games… Sword Art Online II. This is the second season of this series. The initial series (the first half of it at l 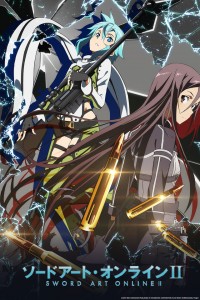 east) was a very cool story about people being trapped in a video game (through their virtual head gear) where the only way to leave the game was to finish it. There was no logging out and if you died in the game you died in real life. Kirito who was a beta tester before getting trapped in the game saved the day. The second half of the series was a different virtual world, one I wasn’t crazy about for all sorts of reasons.

This season  it’s a third virtual world. It’s call Gun Gale Online. Unlike the other worlds where there was swords and sorcerers, or fairies and wings, your goal is to shoot things. Some of the quest pays the players in real money. Someone by the name of Deathgun is killing players in the game and they are dying in real life. Kirito gets asked to join the game and see if he can see how Deathgun is doing this and stopping the guy if possible.  So far I’ve only seen two episodes and I can’t quite get into it. I’ll try though. If I waded through the boring, stupid and borderline creepy second half, I might as well get through the rest of it. 😉

And now a little shonen ai/yaoi: This is based on a manga of the same name. Love Stage!!. Izumi Sena comes from a long line of entertainers. His father is a singer and owner of a talent agency, his mother is a popular actress, his older brother is a rock star and all he wants to be is a manga artist. Unfortunately he can’t dr 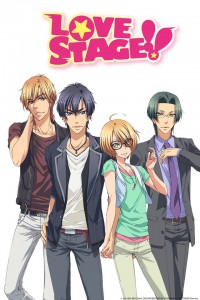 aw to save his soul. His one foray into show business was when he was a child and he got stuck filling in for an actress who couldn’t come to the shoot for the commercial that his parents were in. He made for a cute girl in the commercial but he was hopeless as an actor, his young co-star in the commercial helped him through it.Cue: 10 years later the company who put out that commercial wants to do the commercial with the original cast. Izumi doesn’t want to do it (he had to be bribed by his brother)

The young actor that was Izumi’s co-star is now a popular actor. He wanted to work with the ‘little girl’ who was so nervous. Izumi is still an emotional wreck but Ryuichi helps “her” again with the acting job. So what happens when he discovers the little girl he has been crushing on for 10 years is really a guy?

This site uses Akismet to reduce spam. Learn how your comment data is processed.